As part of his activities in the UK, the Arole Oodua and Ooni of Ife, Ooni Adeyeye Enitan Ogunwusi Ojaja II has signed a Scholarship Memorandum Of Understanding with the University of Oxford to enable him assist students in the study of African studies.

Ooni Ogunwusi who was hosted by the University’s Pro-Vice Chancellor, Dr Robert Easton on Monday 27th November, 2017 signed the scholarship agreement in partnership with the University’s African Studies Centre ASC saying it is a dream come true.

Presenting the Spiritual leader of Yoruba race worldwide to the Oxford University management team led by the Pro-Vice Chancellor, the Director of African Studies Centre, Professor Wale Adebanwi said the scholarship is for the Postgraduate students in Africa studies. He declared Ooni Ogunwusi as the first African leader to be so honoured by Oxford, describing him as the messiah sent by God to revitalize the dying African Culture and tradition.

The Pro-Vice Chancellor, Dr Robert Easton expressed optimism that the  number of Nigerian students in Oxford will increase with the Ooni Ogunwusi/Oxford MSc Scholarship Scheme.

He commended the highly revered monarch for his pragmatic approach to ensuring a better society for the Africans and the mankind, saying the University is motivated by Ooni to continue  welcoming more Nigerians into the school.

“Your Majesty, we have about 60 Nigerian students here which is still very low compared to South Africa’s 150 students. Am sure this your scholarship partnership with us will surely help in increasing the number of the students from Nigeria yearly”.

Ooni in his speech thanked the Oxford University for the appointment of a Nigerian from the State of Osun as the first African to head the African Studies Centre of the prestigious University. He called Professor Wale Adebanwi his good subject and a great son of Africa who is worthy of the position, saying Africans should tell the African stories.

“Seeing Professor Adebanwi today in good spirit of origination makes me very proud as his father because this is the first time a black man would be serving in the. capacity, for this, I heartily thank the authorities of this school”.

“Africa must become a place of pride and we must join hands to make it happen. There was nothing like Ghana, Nigeria, Liberia, South Africa before, we used to be one single people of one humanity, one race, and one source with several Kingdoms.

Nobody can tell our stories, we are the ones to tell our stories. We must know where we are coming from, where we are and where we are going. As the Arole Oodua and Spiritual Leader of Yorubaland, I congratulate Professor Wale Adebanwi and Am very happy to be associated with you and African Studies Centre of Oxford University”. Ooni said.

The Birmingham City University also had earlier on Friday 24th 2017 announced a plan to establish partial scholarships for Yoruba students in honour of the king, saying the University has a long a d proud history with Nigeria.

The Vice-Chancellor of Birmingham City University, Professor Philip Plowden who stated this during a programme organized for the king was corroborated by the Vice Lord-Lieutenant of the West Midlands in UK, Dr Beverly Lindsay 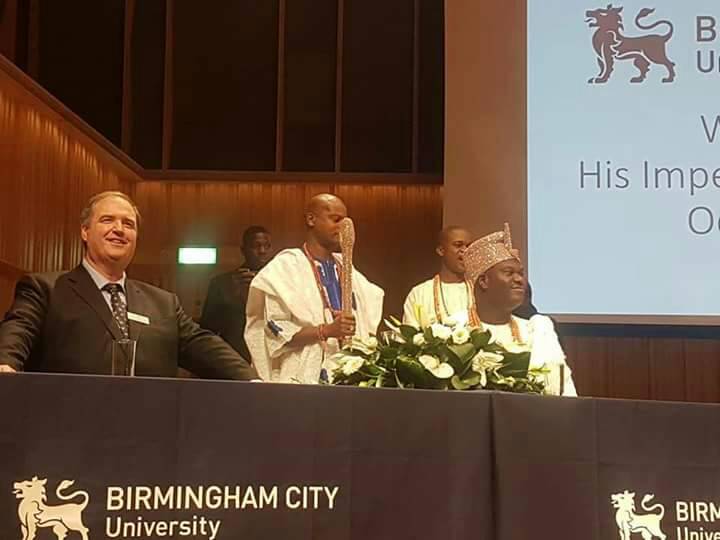