The Arole Oodua and Ooni of Ife, Ooni Adeyeye Enitan Ogunwusi Ojaja II has identified religious intolerance as a bane frustrating the much needed peaceful coexistence among Nigerians, saying  Godliness is different from religionism.

The Spiritual Head of the Yoruba race worldwide stated this while speaking on Thursday during the annual OSOOSI FESTIVAL at Ile-Ife.

He urged Nigerians to see the country’s cultural and religious diversity as a great advantage needed to move forward socially, politically and economically rather than using it negatively, the result of which can only be backwardness.

“Nigeria is blessed with cultural and religious diversity which must not be seen as a curse but a blessing. What people practice today is ungodly religionism. It is very devilish for anyone to kill or maim in the name of religious differences. Deliberate frustration of peaceful coexistence in a diverse society like ours is an act of sacrilegious dogmatism perpetrated by the victims of religious brainwashing”

“We are all one before the Almighty God and we must remain so to allow for peaceful coexistence if we must progress socially, politically and economically “. Ooni Ogunwusi stated.

Obatala adherents at the event said Osoosi is a festival of African pantheon of divinity, configuration and interchange of power.

Dr. Felix Ayoh Omidire, Director, Institute of African Studies, Obafemi Awolowo University, Ile-Ife said “the festival is unique because it shows clearly the purity of Olodumare(God) which we must adhere to.”” The configuration, interchange of power in Yoruba pantheon of divinity is sine-quo-non as belief of worshippers in this deity brings them desire result.” He said

He added that Obatala represents purity and creativity.

Lending their voices to Osoosi Obatala festival, foreign delegates who came to participate in the festival, Mrs. Tracey Gaskin from New York in USA said,  “I am extremely happy to be reconnected back to my root here in Ile-Ife.” Am so proud and full of joy to be here seeing the world respected monarch not let our cherished culture go into extinction.” 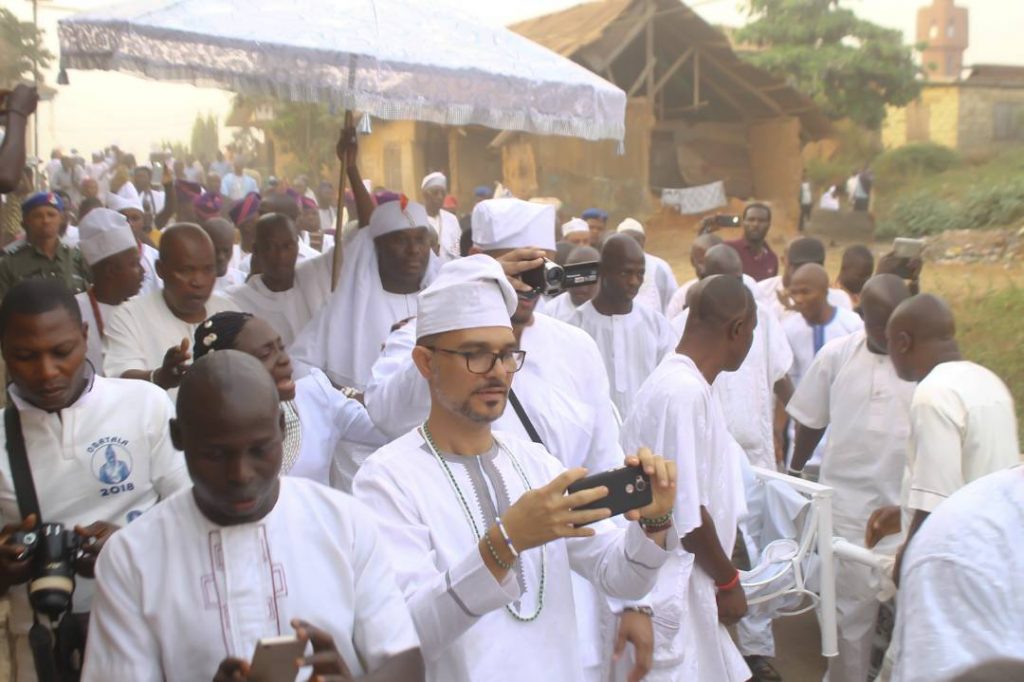 She said that “though I live in America, but I cherish culture and traditions of the African race”.

“I believe in Yoruba culture especially, Obatala because Ile-Ife is our ancestral home.”

We are here to celebrate with the King of Ife who is highly respected all over Brazil “.

The host of the Osoosi Festival and Head of Obatala religion worldwide, His Spiritual Eminence, Oba-isoro OOO Dada urged government to see Cultural tourism as a veritable tool of improving the revenue generation for the sosio-economic development as it is being done in Saudi Arabia and Israel.

“It is so unfortunate that our government prefer to join in the economic development of other countries like Saudi Arabia and Israel by spending our money on pilgrimages which is just a Cultural tourism strategy adopted by those countries to perpetually subject us to their spiritual supremacy, when we have more than enough cultural tourism potentials here too that can be so positively tapped”. OOO Dada said.

The annual Osoosi Festival is part of the activities marking the annual Obatala Festival which started on Monday January 15th 2018 with an international Symposium at Oduduwa Hall of the Obafemi Awolowo University, Ile-Ife.

As a deity of philanthropy and kindness, Osoosi worked with an ally called ‘Ka to ka ki ki ki, ka fi enu re so le’ in which Catholic and Catholism came from.  According to Yoruba beliefs, It is the congregation of Osoosi that led to Christianity, Judaism, Hinduism and Islam and many other religions in the world.

The ongoing Obatala Festival with a gathering of hundreds of foreigners especially from Brazil, Cuba, Venezuela, Jamaica and United States of America is expected to end on Tuesday 23th of January 2018.