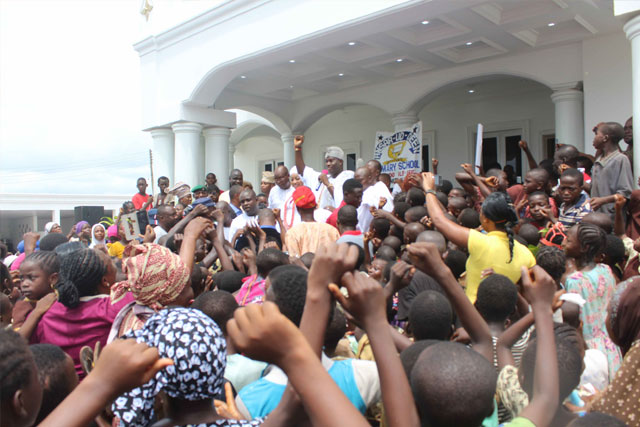 His Imperial Majesty, Ooni Adeyeye Enitan Ogunwusi, Ojaja II, unveileded his tourism vision after his ascension to the throne .

It is historical and a fact of the Yoruba that Ile – Ife is not only the cradle of Yoruba race but the spot where all nations of the world dispersed to the places they all occupy today. Ile – Ife is the mother of all nations and the ancestors thus bestowed on the new Ooni the ancestral vision of ensuring the re integration of all the nations, particularly the Yoruba, back to their mother’s land.

“I will engender a cultural revolution in Yorubaland which will accentuate and showcase the pristine beauty of our tradition and customs so well that it will be irresistible to tourists, delectable to investors and enviable by all nations. I will, with support of all and seasoned Yoruba sons and daughters transform Ile–Ife to a tourism zone, a historical- cultural destination of reference not for global tourists alone but for the Yoruba in Diaspora.’’

‘‘As the custodian of the House of Oduduwa and protector of the values of Yoruba race, I will not stand akimbo, watching with glee the progressive desecration of the culture and tradition of the race and its subsequent eradication from the annals of advanced culture. “It is our culture, tradition and custom that make us what we are as a race in the world. We should rise up as a matter of urgency to embrace, promote, protect, display and enhance our culture and tradition for the glory of the race and for trans -generational positivity.”

On Friday 15 January 2016, Her Excellency, Maria, A. Figueiredo, paid  a historical and memorable visit to the Palace to meet with  Ooni Ogunwusi.

Her Excellency’s visit signified a giant step in the crystallization of Ile – Ife as a tourism zone and her remarks exposed the Ooni Ogunwusi’s vision as not only apt but an awaited project of the Diaspora.

“I am happy to be here in Ile–Ife, the cradle of the civilisation and the source of Black nation. Brazil harbours the largest concentration of blacks in the world, apart from Nigeria. My coming here is not accidental. It is a home coming which I sincerely believe has been destined by the Lord Almighty. “

“It will interest you all to note that Brazil was colonised by Portugal, which forced on us its religion which is Catholicism. Apart from this, the other major religion, which we practise in Brazil is African traditional belief which emanated and was traced to Ile-Ife. Majority of us are Catholics, but all of us still have our traditional identity. For me, I am an Osun worshiper. And I am in Ile – Ife, the source of the world in Osun State.”

Her Excellency congratulated Ooni Ogunwusi not only for ascending the throne of his forefathers with glory, pomp and celebration but for his vision at revitalising the tradition, culture and values of the Yoruba race for economic and sustainable development.

Ooni Ogunwusi, in his response, said “My vision is to employ tourism and culture to empower the youths of Yoruba land, generate employment and facilitate wealth. We have started on this note as 20,000 widows have been employed in cleaning up the city.

On Thursday 28 January 2016, the Cuban Ambassador to Nigeria, His Excellency Melva Pereze De Trejo, led his wife, accompanied by the Secretary of the Cuban Embassy, Mrs Miriam Morales Palmero, on a two – day tour of the ancient city.

The two–day tour which was facilitated by Motherland Beckons, served its purpose, as the Cuban team was not only thrilled but felt at home.  His Excellency remarked,

“I am happy. I feel happy. I feel fulfilled. I am just feeling as if I am in heaven. Ife is home. The Ooni is cool, brilliant and youthful. The meetings I had with the Ooni and other people in Ile Ife were fruitful. I visited many interesting places from which we can now depart for stronger and better cooperation in the future. The people here are very friendly. I felt more at home. I enjoyed the music, dance and other thrilling entertainment and hospitality at the Palace and other places we went to during the tour.”

Ooni Ogunwusi stated  “I am happy that people are retracing their steps back to their ancestral home. It is a good development which should not stop. I want to thank the Ife–in–Council for supporting me and my agenda for the Yoruba race. The vision I have for the race is a task that must be achieved. We have to promote our language, culture and tradition. God deliberately created this race as a light to the world and we must do everything to unite the race, to reconnect our people back to their roots and to let the race take his position in the comity of nations.”

Ooni Ogunwusi  later attended a grand reception hosted by the Cuban Ambassadsor and at his residence in Abuja.  The glorious event was also graced by  45 Ambassadors , who met minds with the Ooni Ogunwusi. The event was witnessed by the Minister of information and Culture, Alhaji Lai Mohammed and the Director – General, Nigerian Tourism development Corporation, NTDC, Dr ‘Mrs’ Sally Mbanefo.

Ooni Ogunwusi emphasised the cultural- tourism interrelationship between Ile–Ife and over 50 countries in the world which are being beckoned on by a clarion call from their motherland. The Ooni revealed at the colourful engagement of the Ambassadors and Diplomats his desire to declare Ile – Ife as a tourism zone.

The  event consisted of  three dimensions: academics, culture and entertainment. Believing that Ife is the home of academic via the status and location of the Obafemi Awolowo University, (OAU), which in itself a paragon of tourism, On the 26th  and 27th February 2016,  Ooni Ogunwusi  declared Ife as a Tourism zone.  Numerous enthralling programmes  were held in Ile Ife as both a celebration and also as a showcase, with the attendance of Ambassadors of Ghana, Cote d’Ivore, Dr (Mrs) Mbanefo. Representative of Professor Wole Soyinka; Director–General, National Troupe, The Ooni Ogunwusi in his words said ,  “It is not about the Ife town alone but a brand symbolisation which is an effort at directing focus and attention of all Yoruba to the notion that Ile ife is not only the cradle of all nations but also that everything about the Yoruba emanated from Ile-Ife. The declaration of Ile-Ife as a tourism zone is also to direct the world’s attention and tourism traffic to Ile-Ife to authenticate and view the hidden treasures of traditional relevance as acclaimed by the historical accounts of great historians and archaeologists like Leo Frobenius and those supplied and reinforced by the holy books.”

“Ile-Ife is indeed the cradle of all nations. It is an enigmatic origin of the Yoruba race where most of the recorded events in the Bible before the birth of our Lord Jesus Christ happened. This is to prove to all that Ile-Ife is the centre of dispersal of all the races in the world.”

“Ile-Ife is a place where the land expands to the world and being the motherland, it is traditionally and officially beckoning to all her children to come back home, re-integrate with the land, refresh their memories and re- unite in cultural brotherhood and vision. This is the real essence and the message of Ile-Ife being declared today as a tourism zone for all.”

Ooni  Ogunwusi pointed out that the declaration was not exclusive to Ile-Ife, bearing in mind that all the Yoruba race are Ife in origin. “What we are actually doing today is to officially register and formally kickstart a positive and productive cultural – tourism deployment and engagement of the inestimable heritage in the course of economic empowerment, wealth creation and employment generation. “

Since the declaration Ife as a sleepy historical city has changed, Ile – Ife is  a tourist destination, love by all , scrambled at by Governors, Ambassadors, investors, distinguished personalities and individuals. The new aura and visibility created by Ooni Ogunwusi and fast tracked by Wanle Akinboboye via Motherland beckons you to Ile – Ife. This is just the beginning of a whole complex of tourism initiatives by Ooni Ogunwusi, which is beyond the imagination of all.