The President of Constituency For Africa (CFA) Mr Melvin Foote has pledged to work with The Ooni of Ife, His Imperial Majesty Ooni Adeyeye Enitan Ogunwusi (Ojaja II) to improve the quality of Africa.

Mr Melvin Foote made this pledge at an occasion at the Congress Library, Capitol Hill, Washington DC during an event in his honour organized by a world famous NGO known as Constituency For Africa(CFA) hosted by the Co-Chairs of the Congressional Nigerian Caucus, Congresswoman Sheila Jackson-Lee and Congressman Steve Chabot.

In his response, Ooni Adeyeye Enitan Ogunwusi charged the African Americans to come together and work for the greatness of the continent of Africa which he called their Ancestral home.

Ooni Ogunwusi described the occasion as a historic demonstration of love to a fellow African driven by the undying spirit of origination which brings the greatest joy in life. He emphasized that the continent used to be one without boundaries before the Berlin Conference of 1884 termed “the rush for Africa” and pleaded for a collective efforts by all Africans both at home and in diaspora especially USA to work for the peace, unity and progress of the continent.

Mr Melvin Foote equally thanked Ooni Ogunwusi for giving the African-Americans a sense of belonging as stakeholders in the affairs of Africa which is their fatherland and went onto say, “In keeping with the spirit of CFA’s work, it is truly an honour to welcome His Imperial Majesty to the Capitol Hill as a global advocate of peace and economic opportunity. We’re pleased Your Majesty is reaching out to the Diaspora for Technical assistance and patnership. And in patnership, I can personally assure Your Majesty the CFA stands ready to work with you to improve the quality of life in Africa and throughout the Diaspora”. 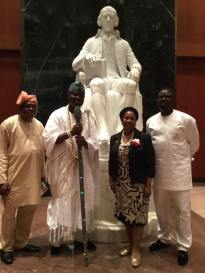 Congresswoman Sheila Jackson-Lee representing Texas 18th district and Co-Chair Congressional Nigerian Caucus commended His Imperial Majesty for being so forthright. Congresswoman Sheila Jackson-Lee noted that since  all the members of the black caucus in the Congress are Africans, they are therefore ready to join hands with the continent’s leaders for health, peace, unity, progress and diplomacy which Ooni Ogunwusi is globally known to have been working for since his ascesion to the throne.

“Your Majesty thank you so much with this sacrifice, thank you for taking the bull by the horn, I can assure you that all of us who are your children and members of the Black Caucus are with you on this project, we are all Africans and ready to join all the leaders back home to ensure peace, unity, diplomacy and progress which you are known to have been pursuing in the last six months”. Congresswoman Sheila Jackson-Lee declared.

Mr Foote explained the mission of his NGO as an initiative is to build a base of support for Africa in the United States and the African Diaspora. The CFA according to him has over the last 25 years established itself as a leading organization in the USA committed to educating and mobilizing the American Public on matters pertaining to Africa and has actively worked in support of major initiatives including AGOA, PEPFAR, YALI and others.

Mr Melvin Foote thanked Ooni Ogunwusi for giving the African-Americans a sense of belonging as stakeholders in the affairs of Africa which is their fatherland and pledged to work with him to improve the quality of Africa.

Ooni Ogunwusi wants positive prophesies for Nigeria, vows to live for God, serve humanity and care for the poor