Ooni of Ife, Is The Father Of Yoruba. Says Alake.

Ooni of Ife, Is The Father Of Yoruba. Says Alake. 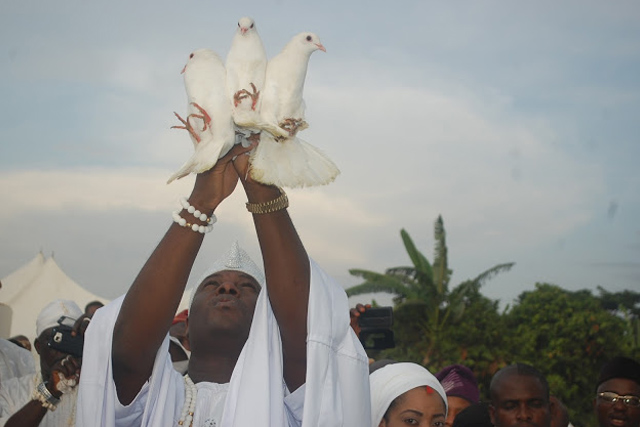 The Alake of Egbaland Oba Adedotun Gbadebo yesterday described Ooni of Ife Ooni Adeyeye Enitan Ogunwusi Ojaja II  as the overall father and spiritual leader of the Yoruba race. Alake made this known during a courtesy visit by Ooni Adeyeye Ogunwusi ‎at his Palace in Abeokuta, Ogun State.

He commended the Ooni of Ife  for his efforts on the unity among Yoruba traditional rulers and pledged his support and that of Egba people for the progress of the race.

According to him ‎”you have done very well,  your unity agenda which you have embarked on in the last one month is highly commendable and we in Egbaland are solidly behind you as the Spiritual leader and father of all Yoruba people”.

He maintained that “Ile-Ife remains the source of all of us in Yoruba land  and the entire humanity as those who have refused to acknowledge this fact over the years are now beginning to see the light”.

He also showered encomiums on former President Olusegun Obasanjo for prostrating flat before Arole Oodua recently at Ile-Ife. He described Obasanjo as a man of Culture and values who should be emulated by all.‎

In His remarks, Ooni Adeyeye who was accompanied by the Oluwo of Iwo Kingdom Oba Adewale Akanbi Telu I praised God Amighty for making the visit a reality and thanked the Alake of Egba Land for his hospitality and love demonstrated to him and his entourage.

He also lauded Alake for supporting the agenda of the uniting Yoruba Nation with a view to bringing together our people towards the development of our nation.‎

He emphasised  that Yoruba did not value themselves as a nation and maintained that we must value our nation and ourselves by ourselves in order to make necessary progress.

The train subsequently moved to the Palaces of Olowu of Owu and Osile of Okeona-Egba, Oba Dosumu and Oba Tejuoso respectively where Ooni was treated also treated as the Father of Yoruba Race.